Strangeness in the Woods: 1966 UFO Close Encounter in New Hampshire

As is more often the case than not, anomalous events are anything but typical, and this next UFO account most certainly falls within the atypical category. Here I will be recounting another brush with the unknown, and again, not widely publicized case from my home state of New Hampshire. An account which also celebrated it's 55th anniversary recently and coincidentally, just a few days before the writing of this article.

The following account took place in the small town of Hampton Falls, NH, a town mostly dominated by farming and known for it's orchards not unlike many other typical, quaint NH towns. On the afternoon of March 29, 1966 for one young boy, it turned out to be anything but typical. At around 4:15pm Benjamin Brackett, then age 10, was out walking his Dalmatian dog in the woods behind his home. Following along a wooded path which leads to a pond, he first noticed something odd on a nearby ridge. Something silver-colored. His first thought was it was a 'radar chaff' which had fallen into some tree branches. As he closed the distance between himself and the object, he noticed what he described as a 'glob with tassels' sticking out of it. As he drew even closer, he noticed the 'glob and tassels' were attached to some sort of silver rod, approximately 1-1/2 ft. long, and then connected to a 'box-like' structure sitting atop the ground. He then noticed the antenna-like feature on top had disappeared, while he had looked away for a moment. At this point he was no more than seventy-five feet away from the object as he continued towards it, and it was then he noticed it was sitting on what looked to be three 'legs'.

Suddenly, to his amazement, a blast of air started coming from the 'craft', which in turn started blowing pine needles around in the vicinity, along with it emitting a low-pitched sound. It then lifted off the ground between six to twelve inches, and stopping in mid air began rotating in a clockwise motion before settling back to the ground again. The odd-looking craft which he described as shaped like an "L", was approximately 60 inches long and forty inches tall. The witness reported afterwards that it moved and maneuvered with 'mechanical-like' precision. The craft then began making a 'electric-like' noise which understandably frightened him but he was just as curious. He noted the exterior and texture of it resembled a 'cork' and looked like a dull aluminum, tarnished silver, not polished. Each of the 'tripod' legs roughly measured twelve inches wide. Underneath, on the bottom of the craft he noticed a brown, inverted, 'dishpan' or dome which measured roughly 24 inches across, with three small openings in view of the witness.

Near the top of the craft he noticed two small openings roughly an inch in diameter, and about six inches apart, too small to make out any interior details. The tripod legs appeared to be made out of a squared-shaped, metallic material. While pondering the 'craft' in front of him and wondering what to do next, young Benjamin began hearing the electric-like sounds again emanating from inside the craft. Then another blast of air exited from underneath the craft as it rose to about ten feet in the air, stopping for a moment and then moving horizontally in a south-easterly direction for roughly 24 feet. The craft then again stopped momentarily, turned clockwise 60 degrees, then shot straight up and out of sight.

On a personal note here, because of the age of the aforementioned witness, I'm sure many might put this story down to nothing more than the vivid imagination and flight of fancy of a ten year old. But then again, young minds are actually the most pure, nonjudgmental and untainted in my eyes. I have no doubt this young witness saw something strange that day in 1966. But what? At it's estimated described size, certainly it would be one of the smaller UFO 'crafts' that have been described at close range. Might it have been a experimental military probe of some sort? Or just maybe, something else beyond our comprehension altogether.

The physical traces left by the object, whatever it was, and the detailed eyewitness account make this CE II case quite unique in the annals of Ufology.

Credit to Michael Schratt at OpenMinds.tv

Chased by a UFO: A Frightening 1973 UFO Encounter in New Hampshire

The annals of Ufology are as diverse and anomalous as the number of seemingly inexplicable events that encompass the field. The following case I shall delve into here is no exception to that rule. Thusly, the state of New Hampshire and the whole of New England in general is surely no exception when it comes to bewildering UFO accounts including the 1965 'Incident in Exeter' and of course the Betty and Barney Hill abduction case of 1961. Right now I shall turn my attention to another case, one that didn't get as much attention as maybe it should have as the two aforementioned cases. The 1973 Lyndia Morel account.

It was in the early morning hours of Friday, November 2, 1973 when Lyndia Morel who worked as a masseuse at the Swedish Sauna in Manchester, NH, clocked out and left work at around 2:45 am. She briefly stopped to have coffee with a friend, then for gas, before setting out on the interstate and heading home to nearby Goffstown, about eight miles west of the city of Manchester.

About the time she reached the outskirts of Manchester on highway 114, a bright light in the sky caught her attention. The further she drove, the closer and brighter the object seemed to become. It flashed yellow, then red, blue and green colors. Thinking it slightly odd, but nonetheless writing it off as a planet or star in her mind, she continued onward to her destination. As she reached the intersection of highways 114 and 114A, the light seemingly blinked out, only to reappear again in the same position of the sky when she had gone through the intersection. It was at this time she realized this object, whatever type of craft it was, seemed to be following her. A type of craft like she had never seen before.

As she drove onward through Goffstown, the light would go out and reappear several times. Only this time the light seemed even bigger, brighter and closer than before, straight ahead and toward the left of her. Soon the bright 'orb' was so much closer that she could make out details of the object. She could make out that the object was an orangey, gold colored sphere with hexagon patterns like that of a honeycomb, with what appeared to be an oval window to the upper left. The red, green and blue colored flashes seemed to be coming from the middle of the object and now she noticed a high-pitched sound emanating from the object.

Around this time Lyndia reported that she seemingly could not remove her hands from her car's steering wheel, and she felt as if the object had taken control of her will and the vehicle, as the car's speed increased and it started going past the Westlawn cemetery. The object drew closer, and when roughly a few hundred feet away, to her horror, Lyndia could make out a strange humanoid figure in the oval window. She described a smallish humanoid behind some sort of console. The figure had a round, greyish head, wrinkled face, a downward turned slit of a mouth, and two large, oversized eyes with dark pupils. It was then she felt this being was telepathically sending her a message, a message to not be afraid.

At this point, Lyndia was beyond afraid, she was terrified. Around this time she was able to slow down her car, turning into in the driveway of a house just after the cemetery. Lyndia jumped out of her car, not paying attention to a German shepherd that was barking at her. She pounded on the door, ringing the doorbell and yelling for help, as by this time she was in hysterics. In the meantime, the object had positioned itself across from the house hovering above the tree line, still emitting the high-pitched sound she had heard earlier.

Finally the startled residents of the home, Mr. and Mrs. Beaudoin came to the door, puzzled  as to what was going on. They were met by Lyndia, cowering and covering her ears, saying a UFO was after her. The Beaudoins looked around and could not see anything in the sky, and likewise hear anything unusual. The object had disappeared. All appeared as quiet and still as any other night. Mrs. Beaudoin phoned the police for the hysterical Lyndia, and shortly after a Goffstown officer, Daniel Jubinville arrived at the residence. He found Lyndia's car was in the driveway with the lights on and the motor still running. After going in and listening to and writing down Lyndia's harrowing account he noted in his report that she did not appear to be under the influence of alcohol or drugs.

It was noted sometime after the incident that the planet Mars was at it's brightest point and was in the Western part of the sky where Lyndia witnessed the 'craft', however that does not explain the other aspects of the account and events that she had claimed occurred. And to this day, an explanation has not been found as to the strange events that took place in the early morning hours of November 3, 1973.

Strangeness in the Woods: 1966 UFO Close Encounter in New Hampshire

Artist rendition of UFO As is more often the case than not, anomalous events are anything but typical, and this next UFO account most cert... 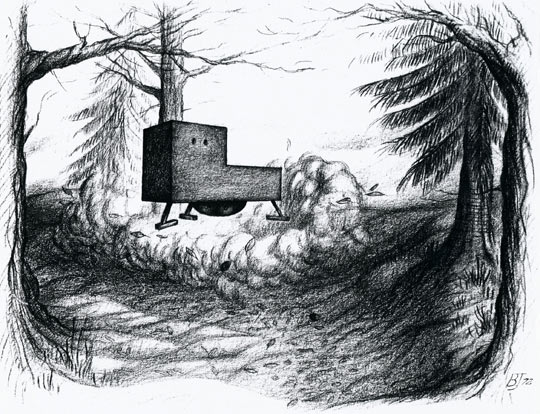